Of all the military bugle calls, none is so easily recognized or more apt to render emotion than Taps. Up to the Civil War, the traditional call at day's end was a tune, borrowed from the French, called Lights Out. In July of 1862, in the aftermath of the bloody Seven Days battles, hard on the loss of 600 men and wounded himself, Union General Daniel Adams Butterfield called the brigade bugler to his tent. He thought "Lights Out" was too formal and he wished to honor his men. Oliver Wilcox Norton, the bugler, tells the story, "...showing me some notes on a staff written in pencil on the back of an envelope, (he) asked me to sound them on my bugle. I did this several times, playing the music as written. He changed it somewhat, lengthening some notes and shortening others, but retaining the melody as he first gave it to me. After getting it to his satisfaction, he directed me to sound that call for Taps thereafter in place of the regulation call. The music was beautiful on that still summer night and was heard far beyond the limits of our Brigade. The next day I was visited by several buglers from neighboring Brigades, asking for copies of the music which I gladly furnished. The call was gradually taken up through the Army of the Potomac."

This more emotive and powerful Taps was soon adopted throughout the military. The first time taps was played at a military funeral may have been in Virginia soon after Butterfield composed it. Union Capt. John Tidball, head of an artillery battery, ordered it played for the burial of a cannoneer killed in action. Not wanting to reveal the battery's position in the woods to the enemy nearby, Tidball substituted taps for the traditional three rifle volleys fired over the grave. Taps was played at the funeral of Confederate Gen. Stonewall Jackson 10 months after it was composed. In 1874, it was officially recognized by the U.S. Army. It became standard at military funeral ceremonies in 1891. Taps is now played by the military at burial and memorial services and is still used to signal "lights out" at day's end. 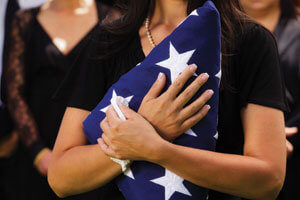 And a star gems the sky

Our support in your time of need does not end after the funeral services.  Enter your email below to receive a grief support message